Dealing With Instances of Juvenile Retail Theft in Illinois 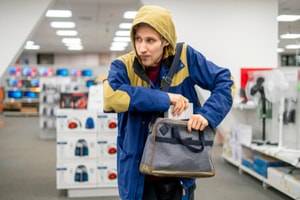 When it comes to teens and crime, there are certain types of crimes that are rather popular with teens, such as underage drinking and drug use. One of the more common crimes committed by those under the age of 18 is retail theft. According to the latest statistics from the FBI, there were more than 93,000 juveniles arrested in 2017 for committing theft or larceny. A juvenile is defined as someone who is under the age of 18, but the state of Illinois does not prosecute all juveniles the same. If a juvenile is at least 17, they can be prosecuted as an adult if the crime is serious enough. Juvenile court is different from adult court, but consequences for retail theft can be serious either way.

In general, retail theft is a crime that occurs when a person intends to deprive a merchant of the benefit or retail value of their merchandise by:

If the value of the stolen merchandise does not exceed $300, the crime is classified as a Class A misdemeanor which carries up to one year in jail, up to $2,500 in fines and up to two years of probation. If the merchandise exceeds $300, the charge is elevated to a Class 4 felony which carries one-to-three years in prison, up to $25,000 in fines and up to 30 months of probation.

There is no set way of dealing with a juvenile retail theft offender. Depending on the age of the child, some merchants may just call the child’s parents and not inform the police. Other merchants may contact the police to impress the seriousness of the situation but recommend that the police not pursue criminal charges.

More retailers are adopting a zero-tolerance policy for theft and have encouraged police to press charges even on juveniles. Fortunately, many juvenile offenders are eligible for deferred prosecution, which prevents a conviction from being entered. The juvenile will attend community service and counseling sessions, and, upon successful completion, the charges will be dropped.

Get in Touch With a Will County Juvenile Crime Defense Attorney

If your child has had a run-in with the law, it can be an anxiety-inducing situation. At the Law Office of John S. Fotopoulos, P.C., we understand that kids make mistakes and deserve second chances. Our skilled Joliet, IL, juvenile crime defense lawyer can help you make sure your child is given the second chance that he or she deserves. Call our office today at 708-942-8400 to schedule a free consultation.