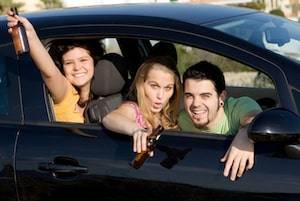 When examining traffic offenses or crimes that can be committed while driving, a DUI is one of the most serious charges one can face. The state of Illinois has cracked down on drunk driving in recent years for both underage drivers and adult drivers. Underage DUI is a very serious crime in Illinois. Not only is an offender violating DUI laws, but they are also violating the minimum drinking age laws. Having a teenage child who gets caught drinking and driving can be a nerve-wracking experience, but understanding the laws and the consequences for breaking them can help ease some of the uncertainty.

In an effort to reduce the number of teenagers who drink and drive, Illinois has adopted zero tolerance laws for drivers under the age of 21. Under these laws, any blood alcohol content (BAC) over .00 will result in charges. A first-time offender will lose their driving privileges for three months for any BAC that is over .00. They will lose their driving privileges for six months if they refuse to take a chemical test.

A second-time offender can expect to face much more serious consequences if he or she is caught drinking and driving while under the age of 21. A second offense under the zero tolerance laws will result in the loss of driving privileges for one year for a BAC over .00 or a loss of driving privileges for two years for refusing to take a chemical test.

In addition to any zero tolerance charges, underage drinking and driving can mean a minimum two-year driver’s license revocation for a first DUI conviction. A driver can be convicted of DUI if there is evidence that they were driving with a BAC of at least .08%. Offenders are not eligible for a restricted driving permit until the second year of license revocation. For offenders under the age of 21, a judge can also order them to participate in the Youthful Intoxicated Driver’s Visitation Program. All of these consequences can also come in conjunction with any charges that would apply to drivers over the age of 21.

DUI charges are very serious, no matter what age you are when you commit them. If you or your child are facing DUI charges, a skilled Orland Park underage DUI defense lawyer can help. At the Law Office of John S. Fotopoulos, P.C., you can have peace of mind knowing that you have an attorney who will fight vigorously for your child’s rights. Call our office today at 708-942-8400 to schedule a free consultation.