Home
Articles
When Can the Police “Stop and Frisk” You?

When Can the Police “Stop and Frisk” You? 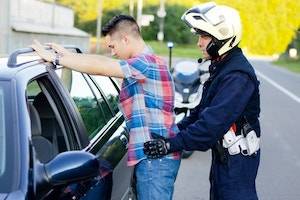 You are walking down the street minding your own business. A cop approaches you and starts asking questions. After a few moments, the cop decides to frisk you and discovers illegal drugs or drug paraphernalia in your pockets. You are arrested and charged with possession.

Is this legal? Can the police just “stop and frisk” you without a warrant? Unfortunately, in many cases they can and do. Illinois courts afford police wide discretion to conduct stop-and-frisk searches where a “reasonably prudent person” would believe his or her “safety was in danger.”

In theory, police are entitled to conduct these types of warrantless searches to protect against a person with a dangerous weapon who might try to hurt someone. But in practice, stop-and-frisk often leads to over-broad policing that unfairly targets certain groups. The American Civil Liberties Union of Illinois notes that Chicago police disproportionately target African-Americans, who represented “72 percent of stops, yet constitute just 32 percent of the city's population.” Additionally, the majority of stop-and-frisks do not recover dangerous weapons or any other illegal activity.

Yet despite the constitutional and moral problems it raises, Illinois courts are still reluctant to second-guess police. In one recent Illinois case, a state appeals court rejected a defendant's efforts to suppress evidence obtained in a warrantless stop-and-frisk.

The case actually began with a wholly unrelated crime. A police officer in Danville, Illinois, responded to a report of a burglary. Arriving at the scene, the officer noticed a man—the defendant in this case—walking down the street. The officer started to question the man regarding the burglary, i.e. did he see anyone fleeing the area.

The Illinois Fourth District Appellate Court upheld the conviction. It held the officer's stop-and-frisk search was perfectly legal. The court said the initial encounter between the officer and the defendant was “consensual,” i.e. the defendant was supposedly free to walk away. The defendant also “willingly” continued his conversation with the officer even after he was asked to remove his hands from his pockets.

Even though the court labeled this encounter “consensual,” it went on to say that an officer is still entitled to conduct a stop-and-frisk if he develops a “reasonable suspicion the citizen is armed and dangerous.” The officer testified he had such a suspicion here, and the court believed him. The fact he failed to uncover any weapon was irrelevant.

Have You Been Subject to a Stop-and-Frisk Search?

Contrary to the Fourth District's position, many people assume that when an officer stops and talks to them, they are not free to simply walk away. This is why the best thing you can do if a police officer starts asking you questions is to assert your right to remain silent and contact an experienced Orland park criminal defense attorney. Call the Fotopoulos Law Office today if you are facing a drug crimes charge and need immediate assistance.