Home
Articles
Can a Dog Owner be Liable for a Motorcycle Accident?

Can a Dog Owner be Liable for a Motorcycle Accident? 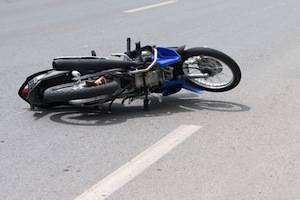 Approximately 4,500 people are killed each year in motorcycle accidents, according to federal safety statistics. Even a non-fatal motorcycle accident can leave a driver with serious injuries and cost thousands of dollars in medical bills and lost income. Therefore, when an accident is the result of another party’s negligence, it is important to hold him or her accountable.

Lying in Road Not an “Overt Action”

Sometimes a motorcycle accident may not be directly caused by another person, but there is still a question as to how a person’s actions may have led to the victim’s injuries. An Illinois appeals court recently addressed such a case. The central question was whether two dog owners’ alleged carelessness led to a motorcycle accident.

The plaintiff was riding his motorcycle down a road in Edgar County, Illinois. A dog, owned by the defendants, was lying in the middle of the road. The plaintiff’s bicycle struck the dog, causing serious injuries to the plaintiff.

In a subsequent lawsuit, the plaintiff accused the defendants of violating the Illinois Animal Control Act. This law deals with “animal attacks or injuries.” Briefly, it states a dog owner is financially responsible for any injuries that arise when their animal “without provocation, attacks attempts to attack, or injures any person” who is simply going about his or her business.

Since it was not clear whether the Animal Control Act applied to the facts of this case—here, the dog allegedly caused injury by lying in the road, rather than chasing or directly attacking the plaintiff—the parties and the trial judge asked the Illinois Fourth District Appellate Court to settle the law in this area. Illinois court rules allows a trial judge to “certify” such questions to the Appellate Court in order to “materially advance the ultimate termination of the litigation.”

Here, although the trial court certified a number of questions, the Fourth District said it only needed to decided one: “Does a dog lying in the middle of the road constitute an 'overt action' toward the Plaintiff for purposes of the Animal Control Act?” The Fourth District’s answer was “no.”

Of course, had the dog chased the plaintiff down the road and caused the accident, that would be a different story. That is precisely the type of liability scenario contemplated by the Animal Control Act. Unfortunately for the plaintiff in this case, the appellate court declined to extend liability to cases where an animal is simply a “passive” obstruction.

This case also illustrates how seemingly simple situations can raise more complex legal questions. If you are in an accident and are contemplating a lawsuit, you need to speak with an experienced Orland Park personal injury lawyer. Contact the Fotopoulos Law Office, to speak with someone today.