Home
Articles
Can I Own a Gun in Illinois if I Have Prior Felony Convictions?

Can I Own a Gun in Illinois if I Have Prior Felony Convictions? 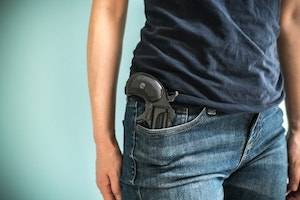 Gun ownership is not an absolute right in Illinois. A resident must obtain a Firearms Ownership Identification card (FOID) from the Illinois State Police in order to legally possess any firearms or ammunition. Anyone who owns or carries a gun without a FOID may face felony weapons charges.

The crime of “armed habitual criminal” refers to the receipt, sale, possession, or transfer by anyone with two prior convictions for any of the following:

An armed habitual criminal charge does not require any proof that the defendant actually used a firearm. Mere possession of the weapon is sufficient. Additionally, the consequences are severe: armed habitual criminal is a Class X felony, the most serious type of felony in Illinois. A prison sentence is mandatory and may last from 6 to 30 years.

On appeal, the defendant argued that the state failed to prove how his attempted armed robbery conviction qualified as a “forcible felony” under the armed habitual criminal law. After all, the defense maintained, not all robberies involve force, and the prosecution allegedly failed to present any details about the circumstances of the conviction.

The appellate court was not impressed by this argument. It held that attempted armed robbery, by definition, required “the specific intent to knowingly take property from another by threat or use of force while armed with a firearm.” This was sufficient to constitute a “forcible felony.”

Are You Facing Weapons Charges in Illinois?

If you are arrested and charged with armed habitual criminal or any other weapons offense, you need to speak with an Orland Park criminal defense attorney as soon as possible. Contact the Fotopoulos Law Office, today at 708-942-8400 to schedule a free consultation to discuss your case with us.

The People Of The State Of Illinois, Plaintiff-Appellee