Home
Articles
What is the Difference Between Burglary, Theft, and Robbery?

What is the Difference Between Burglary, Theft, and Robbery? 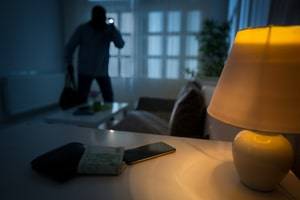 Most of us know that it is wrong to take something from someone without asking. Not only is it not nice, but it is also illegal. You have heard the terms “theft,” “robbery,” and “burglary” before, but many people use them interchangeably. In reality, these words are three different things in the legal world. They each have their own definitions and their own punishments if you are convicted of them. While these three crimes all do involve the unlawful taking of property, the differences lie in the circumstances around how the property was taken.

General theft is a crime that occurs when a person obtains control over property without the authorization of that property’s owner. Theft crimes vary in seriousness depending on the value of the property taken and where it was taken from. For example, property that was taken that is valued at less than $500 is charged as a Class A misdemeanor. If that property was taken from a place of worship or belonged to the government, the crime is elevated to a Class 4 felony. Depending on the circumstances of the crime, theft can carry penalties of up to 30 years in prison and up to $25,000 in fines.

Robbery is similar to theft but involves the taking of property from a person using force or the threat of force. Robbery can be charged as up to a Class 1 felony, which carries as long as 15 years in prison and as much as $25,000 in fines. Armed robbery occurs when a person commits robbery and uses or is armed with a dangerous weapon or firearm. Armed robbery is charged as a Class X felony, meaning the person faces up to 30 years in prison and up to $25,000 in fines.

Burglary is another type of theft crime but occurs when a person enters and remains inside of a building, watercraft, aircraft, home or motor vehicle with the intent of committing a theft or a felony crime. The exact classification of a burglary crime depends on whether or not the offender damaged the structure and whether or not the crime was committed in a school, daycare or place of worship. Those convicted of burglary face up to a Class 1 felony.

If you have been charged with any kind of theft, robbery or burglary crime, you need to get in touch with a Tinley Park, IL, theft crime defense lawyer as soon as possible. Depending on your criminal charge, you could be looking at a lengthy prison sentence, fines or both. At the Law Office of John S. Fotopoulos, P.C., we understand how much of an impact any crime can have on your life. To schedule a free consultation, call us today at 708-942-8400.