How is Permanent Partial Disability Workers’ Compensation Calculated in Illinois? 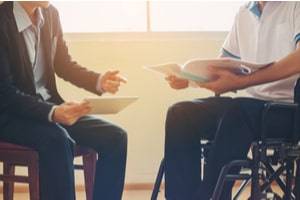 What is Permanent Partial Disability?

According to the Illinois Workers’ Compensation Commission, PPD benefits can be awarded to an employee who experiences:

Technically, there is no specific definition of “loss of use” that is determined by law, but it typically means that a person is unable to do things that they were able to do before the injury. To receive PPD benefits, you have to first reach maximum medical improvement (MMI) as determined by a doctor.

Your PPD benefit can be calculated in one of four ways: wage differential, schedule of injuries, non-schedule injuries or disfigurement. The calculation is determined by the type of injury you have. Most of the time, your PPD benefit will be calculated by using the wage differential method, which can help if you are currently working but making less than you used to before you were injured. To do this, the Commission pays two-thirds of the difference between your current average weekly wage (AWW) and your past AWW.

For example, we will use a person whose pre-injury AWW was $1,200. Because of his injury, he now only makes an AWW of $600. The difference between these two wages is $600. The Commission will pay two-thirds of this difference, which would amount to around $400. The Commission would pay him $400 per week, in addition to the $600 he makes at his new job.

A Joliet, IL, Workers’ Compensation Attorney Can Help You Get Benefits

If you have been injured on the job, you know how much stress and difficulty can be placed on the entire family. Illinois workers’ compensation is a program that is designed to help employees when they are injured at work and cannot work, whether permanently or for a short amount of time. At the Law Office of John S. Fotopoulos, P.C., we can help you get the compensation you need after a workplace injury. Call our Will County workers’ compensation lawyers today at 708-942-8400 to schedule a free consultation and discuss your options with us.